News
·
DOGK: “This project is an opportunity for growth"

The eighth edition of the German Fruit and Vegetable Congress (DOGK) was attended for the first time by Portugal Fresh, the Association for the Promotion of Fruit, Vegetables and Flowers of Portugal, representing more than 3,000 producers.

Portugal Fresh attended as the guest presenter at the eighth edition of the German Fruit and Vegetable Congress, held in the city of Düsseldorf on 20 and 21 September. The Portuguese fruit and vegetable sector was showcased to German trade with a presentation by its president and CEO, Gonçalo Santos Andrade, who gave a detailed account of the geographical and climatic characteristics of the country that enable it to produce fruit and vegetables of guaranteed quality. “Portugal’s geographical location means we are able to provide a level of continuity and regularity of delivery that is difficult for any of our European competitors to achieve. This regularity brings an added value that buyers view very positively, and this factor gives Portugal the advantage of putting itself forward as a preferential business partner,” said Andrade. 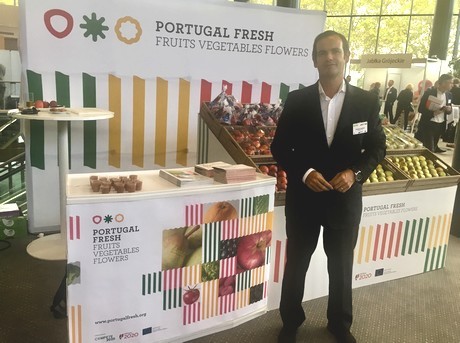 During the presentation, Andrade also highlighted the Alqueva project as a differentiating factor. This is a pioneering project in Europe that encompasses 170,000 hectares in an area where the average hours of sunshine exceed the European average, and where the climate and availability of water offer unique characteristics for developing agricultural production. “This project is an opportunity for growth in the production of top quality fruit and vegetables,” asserted Andrade.

In addition to Germany, Portugal is also planning to promote its fruit and vegetables to other European markets by participating in specific trade events, such as the upcoming Fruit Attraction in Madrid, and visits by the Portuguese delegation to Scandinavia at the end of this year. Outside Europe, Portugal will also be exhibiting at well-known events such as WOP Dubai to promote its products in Arab markets, and at PMA and Shanghai with a view to opening up new markets.